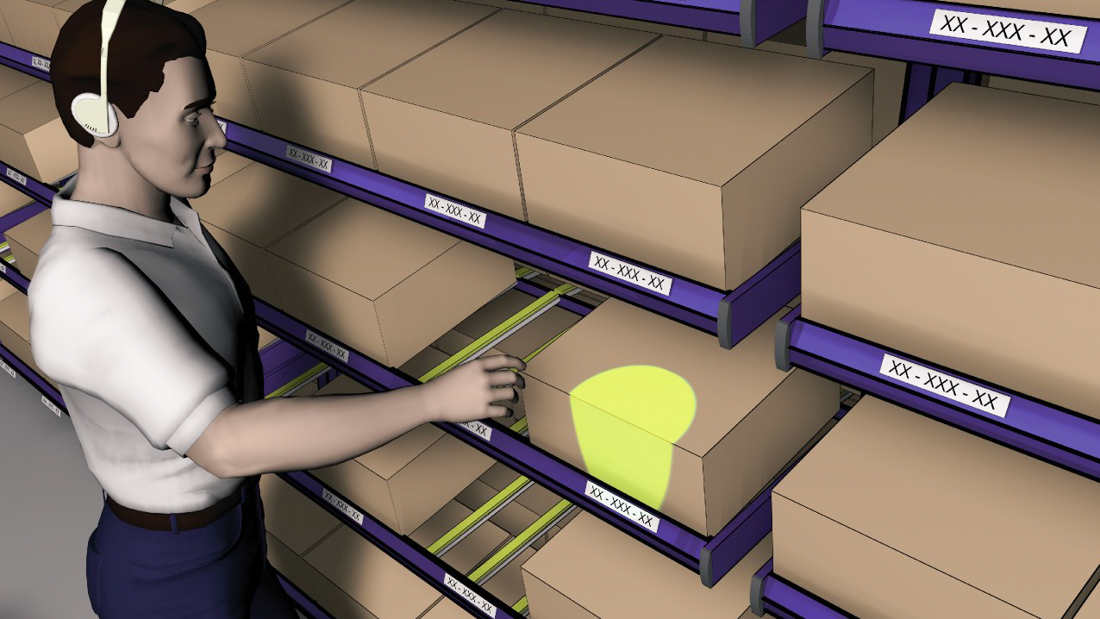 Professional Stage Equipment in the Service of Logistics

one projector, one employee, many storage locations.

From the stage to the camp

MovingHeads are used everywhere in stage technology. A concert without the light sources is unimaginable today. A few years ago LUCA successfully used the technology in the warehouse and called it Pick-by-Point ®. The trademark is patented by LUCA.

The movable light point marks the storage locations - it couldn't be easier. The idea is very simple and practical and can be used for marking of containers, pallets, small and large compartments at a distance of approx. 20 m. The idea is to use the system for the marking of containers and pallets. The number of units or the storage positions in a trolley and other features are signalled on screens or by voice output as required. The number of pieces is not always important during removal. For automotive, the number of pieces is usually constant.

The acknowledgement of the activities is confirmed via scanner, Pick-Radar ® or voice (Pick-by-Voice).

The introduction of our Pick-by-Point ® solution at VW in Wolfsburg celebrated its premiere in 2010. The use of LUCA technology for supply control and sequencing door handles has made it to the first page of the VW magazine "autogramm Wolfsburg 06-07/2010". Not only VW Wolfsburg was very proud of the LUCA solution. The news about the Pick-by-Point ® has spread very quickly in all other VW plants and VW brands. Some of SKODA's employees were particularly enthusiastic about the solution, which was also recognized some time later (see below). The first VW plant is still in operation today in Wolfsburg at a service provider, Schnellecke, and supplies the production line at the VW plant for Golf, Touran and Tiguan. The innovative Schnellecke company has since used several LUCA systems worldwide.

At the Innovation Day in June 2012 in the VW Group (in Martorell/Spain), SKODA wins the main prize as "Best Innovation in Logistics" for the introduction of our Pick-by-Point ® solution. We are delighted that this LUCA solution has received such great recognition in the VW Group. We would like to thank SKODA for recognizing the innovative LUCA solutions for sequencing and order picking in the more than 200 different systems installed in the SKODA plants (in Mlada Boleslav and Kvasiny).

Our Pick-by-Point ® solution has managed to take its place as an integral part of logistics solutions. Some universities and renowned scientific institutes, such as the Fraunhofer Institute in Dortmund (Mr. Detlef Spee), have also installed the LUCA solution within their own walls in order to present the technology to the young logistics generation. Some textbooks and learning materials report about the Pick-by-Point ®.