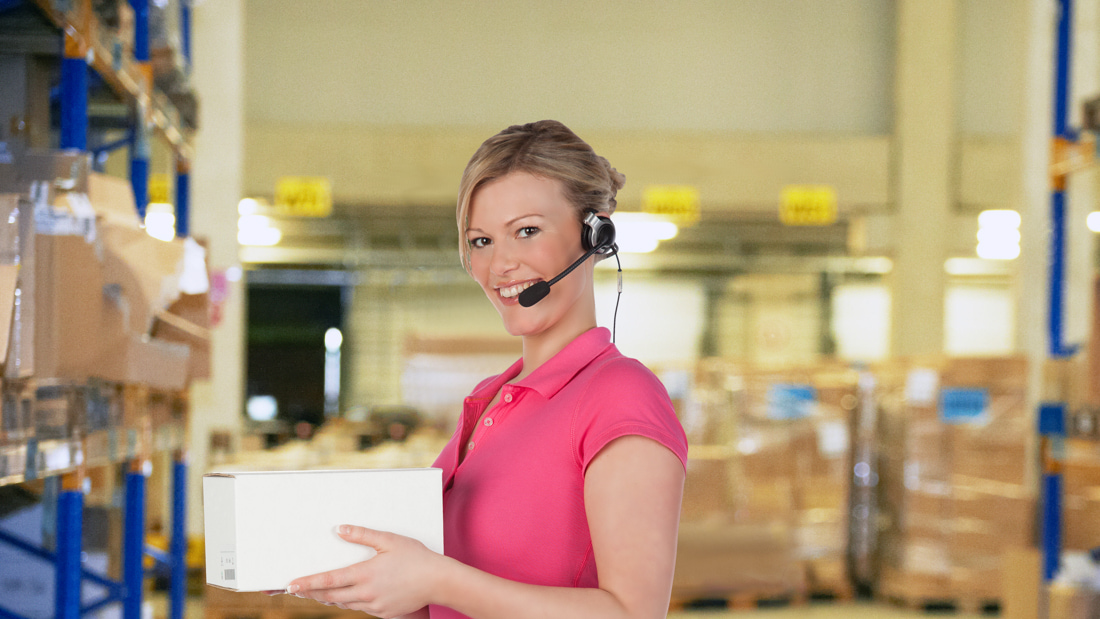 Pick by Voice is a special type of picking system. The order picker communicates directly with the controller via voice, whereby the commands are optimized to the necessary minimum. The employee is to Pick by Voice and are not overloaded. He then hears the work instructions via a headset. The high quality microphone allows its speech input. The speech analysis and speech synthesis takes place directly in an efficient voice terminal, which the employee carries with him. The communication between the Voice Terminal and the LUCA-Server is done directly via the local WLAN.

In this and other articles we would like to introduce you not only to our LUCA systems and their use, but also to give you a detailed insight into the various possible combinations. We will also explain to you how this Pick by Voiceworks and what advantages and disadvantages the system has. In addition, which picking systems fit together and how they are best used. Stay tuned.

Speech recognition is nothing special today. Smartphones, voice input in the car, voice-controlled mailbox, etc. are part of everyday life. However, all these systems work very differently. Almost all online systems send voice input to a large server in a data center. There, very fast computers process the speech input, analyze it and return the result as text. Some systems that do not have a direct Internet connection, such as cars, work offline. The entire speech analysis takes place directly on-board in a powerful computer.

That's exactly how the Pick by Voicesystem works, offline. In a warehouse, the environment is sometimes very harsh. Lots of background noise and traffic. As a result, special conditions must be observed for voice control in the warehouse. The language is therefore used as communication between the employee and the control system.

Despite the background noises and many disturbing factors, you have to keep the optimal orientation and especially the safety. The Pick by Voice Hardware is specially designed for this purpose and is fully LUCA-Server integrated as a picking system. As a system provider we also combine Pick by Voice with other technologies: Pick-by-Light, Pick-by-Point®, Pick-by-Scan, Pick-by-Watch, etc.

Read more on Wikipedia if required

Registration with Pick by Voice

Before starting work, the employee logs on using his or her 3-digit or 4-digit language number. Registration is required to adjust its optimal settings, such as microphone sensitivity, headset volume, speed of speech output and, most importantly, speech. The system saves all these settings on the LUCA-Server off. The employee can change his voice terminal at any time and is not permanently assigned to the device. At the end of work or during a break, the employee logs off using special voice commands.

The headset is connected to a mobile terminal. For safety reasons, only one-sided headsets may be used in the warehouse. The ambient noises of forklift drivers, materials handling equipment and other employees must not be switched off. Special microphones that Pick by Voicesuppress the disturbing ambient noise. The headsets can be replaced by special safety vests with built-in microphones and speakers. We only use professional headsets from Sennheiser or equivalent manufacturers.

The voice terminals are small, lightweight and powerful computers that are mostly worn on the belt. The battery supply of the devices is sufficient for the entire shift. The batteries must then be replaced and recharged. In the past, voice terminals were only equipped with one or two buttons. Today we use modern smart devices with touch screens and partly built-in scanners. Depending on your needs we also combine this Pick by Voicewith Pick by WatchThe system is designed to provide employees with optimum information and user-friendliness.

Our speech recognition is text-oriented and was optimally selected by us as a system provider. The pronunciation of the employees does NOT have to be taught in the Pick by Voicesystem (speaker-independent recognition). The speech recognition system recognizes the individual words, numbers, sequences, etc. and supplies the LUCA-Server the necessary information. In response, the process control sends corresponding voice commands. If required, various language versions are available for foreign employees. Read more about supported languages below in this article.

In some applications, the employee must enter item numbers, serial numbers, or batches. A barcode scanner is Pick by Voiceintegrated into the system for this purpose. Depending on the frequency of use, the integrated scanners of the voice terminal or separate small back-of-hand scanners are used. By using the scanners, the acquisition costs increase, but they significantly improve the quality as well as the picking performance of the system.

The powerful LiIo batteries are sufficient for a whole shift without any problems. Depending on the hardware used, it is sometimes even possible to replace the batteries within 30 seconds during operation. The voice terminal does not switch off.

In accordance with the safety regulations for LiIo batteries, the charging stations are always located in safe places and are clearly visible. We pay great attention to the correct and professional execution of the systems.

In every warehouse the processes are somewhat different. Of course, it is basically a matter of picking, but this must usually be carried out in different ways. For this reason, it is hardly possible to create a standard voice dialog that meets all requirements.

However, a simple example of a withdrawal is intended to briefly illustrate the possible procedure:

The dialogs are customer-specific and are very suitable for slow picking. Even the simple example shows how many actions must take place during a withdrawal.

Not every employee is the same. The new employees first have to understand the voice commands correctly. The experienced, on the other hand, want to play the voice commands very quickly. Depending on the environment and habits, the volume must be adjusted. The system saves all these personal settings on the LUCA-Server and reactivates it after each login.

All settings are easily LUCA-Servertraceable on the control panel.

In this we Pick by Voicedistinguish between speech recognition and speech output. After logging in (login with numbers), which always takes place in a national language, each employee is assigned his language and the corresponding files are loaded. Each language version is associated with separate language licenses, which are, however, very quickly amortized by international crews. The use of different languages is very advantageous in this case.

The following languages are available for speech recognition:

What is the difference between the two language outputs? The natural language is more pleasant for the employee to be higher. It does, however, have some drawbacks. New commands must be separately recorded, edited and Pick by Voicemanually inserted into that. With artificially created speech (speech synthesis), the speech output is output as read text. Synthetic speech output is already at a very high level today. It is very flexible, but cannot replace the natural language 100%.

Modern navigation systems can be a very good example of artificial language. Sometimes the expenses sound a little strange, but this is basically not an obstacle for the deployment.

The following languages of speech synthesis are available to us:

The development continues. We will certainly update the list of languages again soon.

LUCA offers several picking systems, which allows an optimized solution to be created. One of them is also Pick by Voice. The system is very popular for large parts picking, where voice commands rarely need to be used. Other systems are available for fast picking of small parts. Due to a large number of supported language versions, the Pick by Voice very good for the foreign employees, whereby even the handling of the system has to be learned first.